Why Cambridge Analytica is overrated 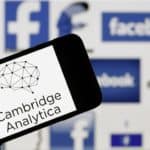 What Mark Zuckerberg thinks of Donald Trump is not known. He is said to have congratulated the US President at a private dinner that he was "number 1 on Facebook". That at any rate claims Trump himself - which, however, after counting of the Washington Post for more than 15,000 lies and misleading claims has brought into the world since he took office.Whether the Facebook … END_OF_DOCUMENT_TOKEN_TO_BE_REPLACED