You are here: Home / Cryptocurrency / Not one not two, Three digital pet rock cliparts sell for $600K each 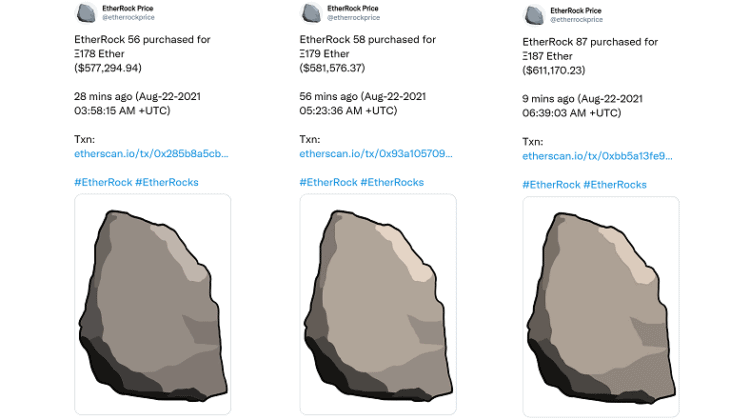 This month has been crazy for all sort of NFT assets. Last week a digital Ape sold for over a million dollars. Now this rock clipart has sold for a whopping sum of $600K.

As per the developer’s website, this NFT project was started in 2017, making it one of the earlier applications of the NFT collectibles. The developer was clearly inspired by the 1970’s pet rock craze.

Only 100 such rocks were created, making it much rarer than cryptopunks and bored apes, which have 10,000 copies and still selling like hotcakes, even in million-dollars price range.

But like other NFTs there are generated by computerized variations in color and shading.

The buyer of the EtherRock no 56 is Justin Sun, the founder of popular torrent client bittorrent and TRON. He shared his purchase in a cryptic tweet.

Though he didn’t mention the ID of the rock he purchased it could easily be traced back to the below tweet and the time stamp.

And the purchase of Justin Tron is only the first to cross half a million dollar mark. There have been at least 3 such sales in the past 24 hours, for up to 611K US dollars.