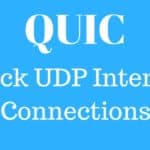 The key: more secure connections and better web performance. One of Google's many efforts to make the web faster is now accessible to everyone. With Quic, Google has improved the speed and security of our internet connections. The protocol, tested for 8 years, is now mature enough to be adopted on a larger scale. Earlier this week, the Internet Engineering Task Force … END_OF_DOCUMENT_TOKEN_TO_BE_REPLACED