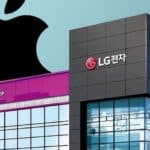 To everyone's surprise, LG may soon start selling Apple iPhones. As LG has cut losses and stop manufacturing smartphones, Apple appears to be taking advantage of the situation to expand its reach in South Korea. After years of declining sales, on April 5, LG Electronics announced it was withdrawing from the smartphone market. LG will no longer produce its own Android … END_OF_DOCUMENT_TOKEN_TO_BE_REPLACED