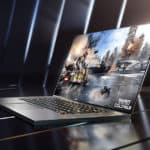 As with the Turing generation, NVIDIA is preparing to launch SUPER variants of its mobile GPUs. On a laptop, this would first materialize by adding an RTX 3080 SUPER and another mysterious chip to the existing line-up. A few weeks after the introduction of the RTX 3050 and 3050 Ti, which allow NVIDIA to offer (finally) effective replacements for the GTX 16XXs of the past … END_OF_DOCUMENT_TOKEN_TO_BE_REPLACED