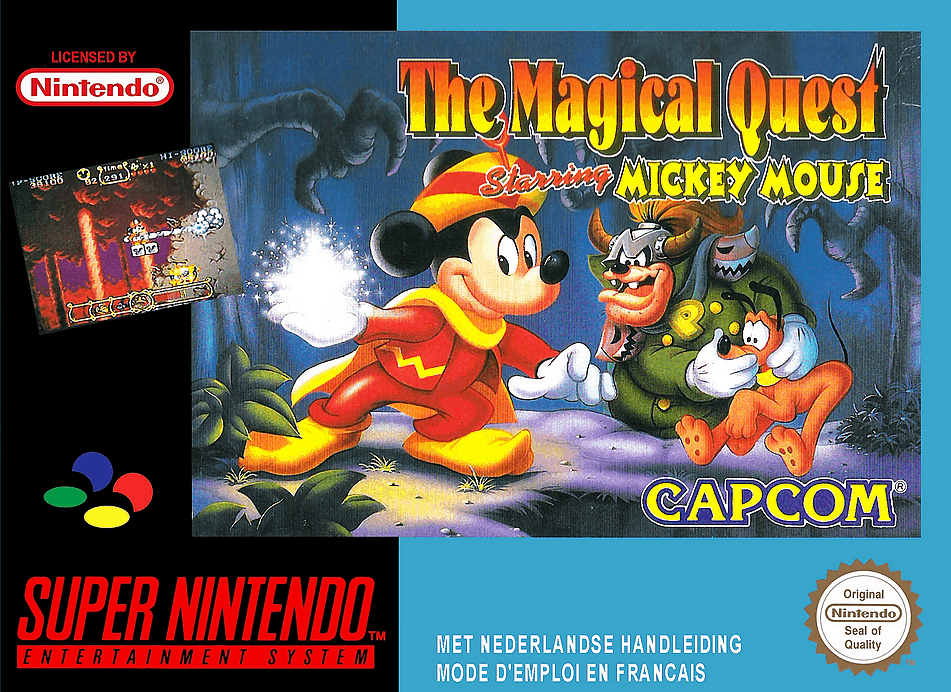 In 1993, the Capcom / Disney collaboration gave birth to a brand new platform game Mickey, the first of an upcoming trilogy: Magical Quest.

Remember. There was a (blessed?) Time when our video games were bought, and very often also chosen, by our parents. Parents who trusted a license then in full glory, certain to offer their offspring a game worthy of a passage in CM2. And contrary to what one might think, for some, it rhymes with some titles of extraordinary quality. This was particularly the case for this The Magical Quest starring Mickey Mouse, carefully wrapped with love in a gift wrap… which was savagely torn one Christmas morning in 1993.

At the antipodes of the battle of teraflops, 4K and 60 fps, NEO • Classics offers you a return to the origins of video games. From the 2D title in large pixels to at least distant game to the hesitant 3D, this column invites you to (re) discover the video game nuggets that opened the world to the 10th art.

Capcom at the wand

On NES already, Capcom and Disney had allowed players to enjoy some rather extraordinary productions with Darkwing Duck, Chip’n Dale (Tic and Tac) or even the unforgettable Duck Tales… A collaboration which obviously continued on consoles 16 bits, and if some remember in particular The Lion King, Aladdin, Goof Troop, Donald in Maui Mallard or the timeless Mickey Mania, it is another game stamped Mickey which marked a generation of players.

Launched a year before Mickey Mania, The Magical Quest is an exclusive Super Nintendo game, developed and published by Capcom, and incidentally is Mickey’s first appearance on Nintendo 16-bit. A platform game in the purest tradition of the time, developed between Japan (Capcom) and the United States (Disney). Indeed, despite the pedigree of Capcom, the giant Disney has supervised the development of this The Magical Quest, in order to ensure that the final product would be in perfect harmony with the philosophy of the company.

In fact, in 1993, how not to succumb to the call of this The Magical Quest? Indeed, as often, the cover of the game is quite extraordinary beauty, and a genuine invitation to play for all children/adolescents of the time. The back of the box promises its side 6 magical worlds to explore, not to mention four small screenshots that augur a crazy adventure, to the rescue of poor Pluto captured by the infamous Pat Hibulaire.

The Pat Hibular kind of game, but almost!

And of course, as soon as the cartridge is inserted into the Super Nintendo and this last power-up, the game welcomes us with a very simple title screen, which allows you to discover Donald, Goofy, Pluto and Mickey in the background, and supported by a just magnificent music, the whole inviting us to press the Start key. From then on, we are entitled to a very “Disney” introduction, with ultra-colorful visuals, and always this fantastic music, signed by Mari Yamaguchi, at work in particular on a certain Super Ghouls’n Ghosts. The synopsis is silly yes (we are on pure Disney of the time), and after a minute this adventure starts plunging the player into the first of the six magical worlds promised by the game box.

And at this level, those who knew The Magical Quest starring Mickey Mouse could not forget this first contact with the game. Once again, we find ourselves immersed in a very colorful universe, which teems with life and details, and we add in passing the basics of gameplay. A button to jump on enemies, a button to grab certain objects, the gameplay is simple and precise; the grip is immediate. Better yet, rather than simply jumping on his enemies to shoot them down, it will be a question here of knocking them out with a good butt on the noggin, before grabbing them and sending them spinning in the background.

And there again, the whole is accompanied by a just masterful OST… and whose quality will never lack until the end of the adventure. So, of course, it “paddles” sometimes, it even paddles a lot but we are ten years old, we have wide-eyed ears on the alert and we control a Mickey larger than life! The parents are delighted. Too bad, however, that the side ” two players ” is actually content here to pass the controller to his companion, unlike the cooperation mode that one might expect.

The perfect game for young and old?

Quickly, we access what is also the particularity of The Magical Quest, namely the costumes. Indeed, the game allows Mickey to don different costumes, which will give him new characteristics. We can transform into (apprentice) sorcerer, firefighter or mountaineer. Mickey then has certain powers, which cannot be abused, since a small gauge governs them. Better yet, there are stalls within the different levels that will increase Mickey’s health or even his magic gauge. We will not speak of “RPG” here, but this “evolutionary” side was rather rare in games of the genre.

The other good news is that The Magical Quest starring Mickey Mouse isn’t a demanding game, far from it. The adventure certainly requires a minimum of timing and reflexes, especially in the face of bosses, but the whole remains accessible to the greatest number… unlike other Capcom productions of the time. The other side of the coin is obviously the lifespan, with a game that then came full circle … in an hour.

But whatever the bottle, as long as you have drunkenness, and with its enchanting visuals, its masterful soundtrack, its little “amusement park” side sometimes and the intelligent use of Mode 7, without forgetting of course the precious Disney license, The Magical Quest provided quite extraordinary playing pleasure for the toddlers we were then… and for the adults we have become today.

A trilogy on Super Nintendo!

Obviously delighted with the reception given to The Magical Quest, Disney and Capcom put the cover back, in 1994, with The Great Circus Mystery: starring Mickey and Minnie Mouse. An opus which takes up the major lines of the first episode, with however here the possibility of embodying the choice of Minnie or Mickey. Better yet, the game is finally playable for two, in cooperation, the players than playing the two mice simultaneously on the screen!

And imagine that as early as 1995, Capcom and Disney did it again, with Disney’s Magical Quest 3 starring Mickey and Donald. A third opus which this time highlights the most adorable angry duck on the planet of Disney who, alongside Mickey, will have to help his nephews kidnapped by a magic book controlled by… Pat Hibulaire, again him!

No revolution for these episodes two and three, which use the excellent formula developed by that of 1993. Note, however, a somewhat more substantial lifespan for the third episode, since unlike the first two which end in under an hour, Disney’s Magical Quest 3 starring Mickey and Donald will require just under two hours of your precious time.

The bad news, however, is that this third episode was launched exclusively in Japan, on Super Famicom. Note that in the early 2000s, Capcom reissued the three opus on a certain Game Boy Advance, by integrating the character of Minnie in the first opus, however absent from the original version.

Say that if you do it early enough after the meal this Sunday noon, you should be able to finish the three Magical Quests before dinner… or even before the snack if you manage well.