You are here: Home / Uncategorized / Bitcoin on the assault on lost methane 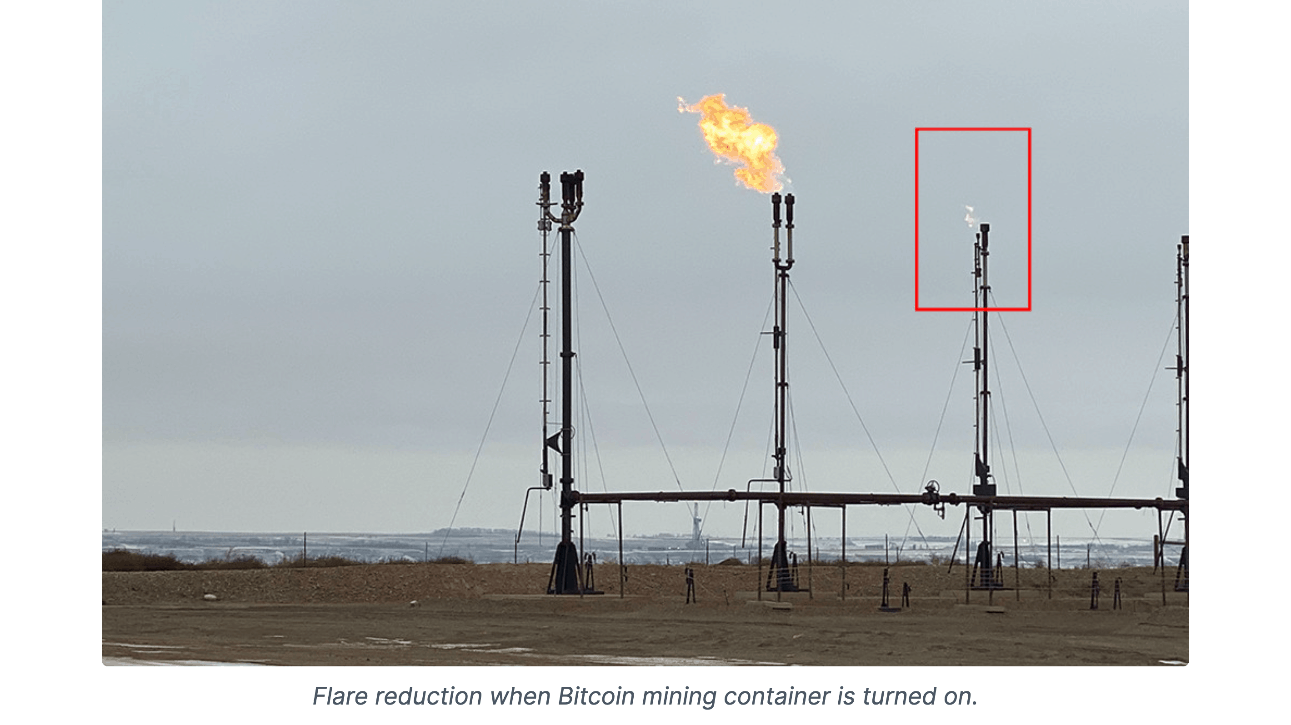 Several companies have developed solutions to avoid burning methane, until then wasted or released into the atmosphere by oil wells. While waiting for oil exploitation to disappear, can Bitcoin make it cleaner?

“We are helping oil and gas producers reduce their emissions and operate more efficiently”. This is how Upstream Data, a Canadian company founded in 2017, describes its mission. His solution? “Coupling modular Bitcoin mining data centers with natural gas engines, to convert lost energy into useful work while monetizing it” .

And the approach is far from isolated, at least in North America. In the United States, Great American Mining “monetizes wasted, unrecoverable and undervalued gas in the oil and gas industry, using it as a source of energy production for bitcoin mining.” EZ Blockchain also offers “a solution for the current problem of wasted energy on the oil fields” based on containers housing Bitcoin miners, just as Giga Energy Solutions has been doing in Texas since late 2020.

The scourge of flaring

To understand the interest of these solutions, it is necessary to know how the extraction of fossil resources works. In particular, when crude oil is removed from underground layers, it contains gas, previously present in liquid form but which, due to pressure differences, escapes in gaseous form when it rises to the surface. Large quantities of gas are thus permanently released: on some wells, the extraction of one cubic meter of oil can lead to the release of several tens or even hundreds of cubic meters of natural gas.

There are different ways of using this gas, such as storing it, re-injecting it into basements or converting it into fuel via petrochemicals (transforming methane into methanol for example). But these solutions are cumbersome and expensive, and the vast majority of oil companies do not use them. After all, gas is just a side effect of oil extraction, the only end of which is… oil. And since a large part of this gas is methane, which is highly damaging to the environment, letting it escape into the air is not an option. This gas is therefore quite simply burned, with no other form of process and without it being transformed into any source of energy.

This principle, called “gas flaring” results in the fire flares that we see overhanging oil wells, offshore oil platforms or refineries. Although the oil industry emphasizes that releasing this gas into the atmosphere without burning it would be much worse in terms of environmental impact, many argue that flaring is both a waste of energy and a real ecological disaster.

In fact, the numbers make you dizzy. As the World Bank notes, “Thousands of flares at oil production sites around the world burn approximately 140 billion cubic meters of natural gas per year, causing the emission of over 300 million tonnes of CO 2. in the atmosphere”. A huge mess, since “if this quantity of gas were used for the production of electricity, it could provide around 750 billion kWh of electricity, more than the current annual electricity consumption of the entire African continent”. Ecologically, the bill is heavy: on its own, flaring represents almost 1% of global CO 2 emissions.. And to this is added the fact that flares are not perfect and only burn 97 or 98% of the gases, so 2 or 3% of the methane – a gas contributing up to 80 times more than CO 2 to global warming – escapes into the atmosphere without being burned.

To stem this scourge, in 2015 the World Bank launched “Zero Routine Flaring by 2030”, an international initiative to encourage the complete cessation of routine flaring by 2030 (there is also occasional flaring, for example, for maintenance or safety operations, but which concerns much smaller volumes).

It remains to be seen how to go about putting an end to a 150-year-old practice. And that’s where Bitcoin comes in.

As the World Economic Forum (WEF) pointed out in February, “putting an end to flaring by 2030 is possible – but it would cost in the order of $100 billion,” . And not all the technologies considered doing so are economically viable. “Small modular power generation units, modular LNG units mounted on trucks and integrated systems for compressed natural gas are viable alternatives to flaring, but they can be costly or onerous for an operator”, recalls the WEF. However, Bitcoin can be a game-changer.

For Great American Mining (GAM), joining forces with oil and gas producers on the one hand and Bitcoin miners on the other “makes sense”. “Energy producers looking to increase their income can do so by selling their gas to Bitcoin miners. Better yet, if they have a bit more of a risk appetite, they can use their gas to mine bitcoin on their own, freeing up more value from the energy content of their gas than they could by ANY other. mechanism,” explains the company. In short, Bitcoin provides a financial incentive to avoid flaring. As GAM points out, “Removing waste is amazing. To do it in a way that also makes energy producers more profitable is a real boon”.

And this windfall could also be verified ecologically. “Bitcoin provides a solution to the waste and flaring of gas, which has always been a source of waste in the oil and gas industry. This can have a considerable environmental impact over time and it is a completely scalable solution” summarizes Upstream Data. The smallest Bitcoin miner it offers, running on a 50 kW natural gas generator set, “removes over 170,000 cubic meters of methane per year,” she assures, while “some oil producers use engines 10 times larger, therefore eliminating 10 times this volume of waste gas” .

Many of the companies proposing to limit flaring through Bitcoin mining emphasize how timely the convergence of the two worlds is. “It would take years to develop and build all the infrastructure necessary to solve large-scale flaring,“ notes EZ Blockchain, which highlights how its alternative solution, based on mobile and modular containers, can be deployed quickly and without the slightest investment. initial from the oil or gas producer. They installed the containers in 24 or 48 hours and, without being connected to the electricity grid, generate bitcoins as soon as it turned them on – while eliminating the flaring of the gas used to power them.

However, recent interest in these solutions is also because of the significant increase in the price of bitcoin. As described by the CEO of EZ Blockchain, “industrial oil and gas were not attracted Bitcoin in 2018”. But, while government and media pressure is exploding on the climate and environmental issue, the means to limit or stop flaring are still expensive, while Bitcoin has democratized and its price has exploded. In June 2018, a bitcoin peaked at $ 8,000, but it is worth four times as much today. Even if it remains linked to the volatility of cryptocurrency on the markets, the financial equation is therefore not comparable – Bitcoin is more “attractive” today, especially since it now enjoys the powerful support of entrepreneurs, institutions or public officials.

The data center as an alternative to flaring

The principle of using gas that is usually wasted or burnt is not limited to Bitcoin. Crusoe Energy offers a range of data centers that capture wasted energy to power advanced IT systems, whether in artificial intelligence and deep learning, scientific computing or cryptocurrency mining.

Its “digital flaring attenuation” solution removes up to 98% of methane and 63% of CO 2 equivalent, compared to flaring. And the company is booming: already operating 40 mobile containers mining bitcoins, it expects to quickly have a hundred while doubling its workforce, after a fundraising of 128 million dollars in April 2021.

And the big players in the oil industry seem attracted by this type of solution, at least in North America. As Reuters notes, at least two large publicly traded oil producers in North Dakota and Canada are already using Bitcoin to limit their flaring , as is Montana state’s largest oil producer. And new laws providing tax incentives for oil producers to generate electricity on-site to avoid flaring have recently been passed by several states, which could further increase the industry’s interest in data centers and cryptomining.

Bitcoin could therefore prove to be a novel and useful solution to help resolve the thorny problem of flaring. But, conversely, the waste and pollution inherent in the oil industry could also be an opportunity for Bitcoin.

Last May, Elon Musk revived the old debate about the ecological impact of Bitcoin, announcing that Tesla will accept bitcoin payments when mining is more environmentally friendly. The announcement sparked a lot of controversy and appears to have deepened divisions. On the one hand, detractors of Bitcoin believe it represents an energy mismanagement and an ecological disaster for the planet, knowing that part of the mining still relies on coal plants. Many experts say on the contrary that Bitcoin is an ecological solution., since it is already based to a large extent on renewable energies (according to studies, between 39 and 73% of the electricity used by Bitcoin comes from renewable energies) and also makes it possible to absorb energy surpluses (in particular of hydroelectric origin) which would otherwise be lost.

The flaring problem adds an interesting component to the conversation. As GAM notes, “Bitcoin miners can now use wasted or underutilized gas in the natural gas value chain to lower their cost of electricity consumption down to $0”. From the point of view of Bitcoin miners, using gas that is necessarily cheap, since intended to be burned for no consideration, can therefore be profitable while helping to limit harmful emissions – and to make Bitcoin “greener” ( as Elon Musk wishes, by the way).

Globally, the stakes are high. As Braiins, one of the oldest Bitcoin miners in Europe, calculates, the flaring of natural gas in the United States is equivalent to approximately 1,520 billion BTU / day (British Thermal Units), or “wasted energy that could be used for generate 162 TWh / year of electricity”. However, according to the Cambridge Center for Alternative Finance, Bitcoin currently uses 116 TWh/year. This means that “gas wasted and burnt to waste, in the United States alone, could be enough to supply the entire Bitcoin network with electricity.“

In the end, we understand that Bitcoin’s power consumption and the flaring problem could be increasingly closely linked – and that the subject of Bitcoin’s environmental impact is more complex than it seems.