You are here: Home / Blogging / Tomorrow, robotic farms in every city? 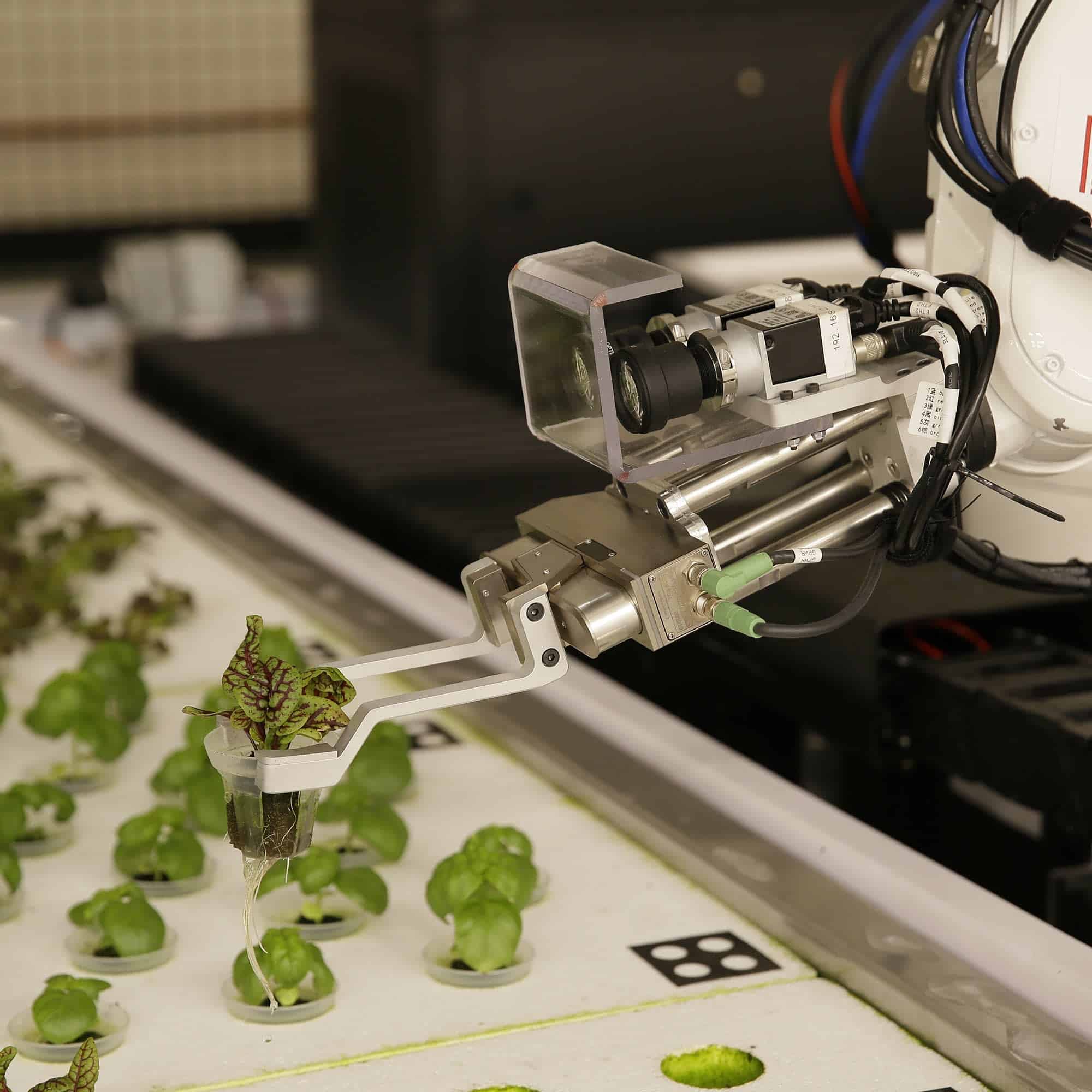 What if they grew fruits and vegetables indoors, without soil and almost without human intervention? What if this was one of the most effective responses to the climate and environmental challenge?

“Robotic”, “vertical”, “urban” farms … There is no shortage of expressions to designate agricultural installations of a new kind, which have appeared in recent years. Their principle is to take advantage of the most advanced technologies, in closed and controlled spaces, to develop automated agriculture with reduced environmental impact.

In these high-tech farms, most often based on hydroponics, everything is electronic and digital. The light is artificial and comes from LEDs. Sensors, cameras and networks monitor the plantations, collect massive amounts of data and help optimize the growth of each variety of plants. Systems based on machine learning (“deep learning”) are sometimes used to further refine the selection of plants or the parameters affecting production. And the harvests are often ensured or at least facilitated by robotic arms and machines.

Far from the idea that we have of a traditional agricultural plantation, these futuristic farms, worthy of a space station, have multiplied in many parts of the world.

If the first commercially operated urban farm started in Singapore in 2012 (Sky Greens), the principle has become popular in the United States since the mid-2010s. And giants of this new industry have already emerged there, such as Plenty, which grows “at unprecedented speed” several varieties of lettuce or kale in indoor farms “using 100% renewable energy (wind and solar)”. Founded in 2014, the company has benefited from over 500 million dollars of private investment (including 150 million last October) and is preparing to open in California the largest indoor vertical farm in the world (in volumes produced).

They devoted many urban farms to aromatic plants, salads and micro greens, but the trend is towards the expansion of crops. “To date, we have grown 550 different varieties of fruits and vegetables,” assures AeroFarms, another heavyweight in the sector in the United States, which operates three vertical farms and is currently developing the 6th generation of its indoor growing technology. Plenty is now opening up to the cultivation of strawberries while, in the United Arab Emirates, Madar Farms is preparing to open a vertical farm of 5,000 m 2 this year. Can produce up to a ton of tomatoes per day. Highly technological, the installation will expand the concept of “container farms”: compact and expertly controlled enclosed spaces, already used by the start-up to produce salads all year round, including in an arid zone.

The trend has given rise to high-tech companies dedicated to this new type of agriculture. For example, in Scotland, IGS (Intelligent Growth Solutions) does not operate a commercial farm itself, but develops and supplies all the building blocks to set up fully automated “cultivation towers”. They integrate sensors to manage temperatures, humidity, water circuits, nutrients or CO2 levels., ventilation and air humidity recovery systems, or even robotic shelves… not to mention “smart lighting”, for which the company has filed several patents: “intelligent lighting systems“. Based on LEDs mixing colors to optimize crops and reduce electricity consumption.

And robotization is only increasing. In the United States, Iron Ox is developing “autonomous greenhouses” with a robotic approach, but also multi-crops. Opposing automated systems “thought of as one-product lettuce-type factories,” the company advocates a more adaptive view of the automatic farm. “With our technology, we can cultivate all kinds of products. Our operations can evolve because they do not optimize our robots for a single job,” describes the CEO. After opening its second robotic farm in California and completed raising $20 million in funds in September 2020, the company now plans to expand nationwide.

A solution to multiple problems

Besides spectacular production rates, the virtues of robotic farms are almost an ecological miracle, on paper at least. The quality? It is tested and proven. The products are perfectly healthy, and even often judged to be richer on the nutritional plan, and more tasty.

The water? At equal production volumes, most urban farms consume 10 times less water than traditional crops. Mirai, a pioneer in the sector in Japan, even estimates that its three giant vertical farms, which recycle most of the water used, require 50 times less water than conventional agriculture. Knowing that water will be a problem in the decades to come and that agriculture represents 70% of the world consumption of fresh water, the argument would almost justify the generalization of robotic farms.…

Pesticides? They are totally absent from vertical farms, which are above all closed, highly protected and monitored environments, from which they excluded insects and parasites. Many of the facilities are also like real “clean rooms”, with impeccable hygiene.

Waste? Low, even negligible. “Our production-related waste is less than 2% – an average waste reduction of 85% compared to conventional channels,” explains Jungle.

Space? Almost all vertical farms use less than 95% of the area usually needed for crops. As Plenty explains, “you can fit a 600 hectare plantation in a building the size of a neighborhood supermarket”. It also becomes possible to cultivate absolutely anywhere.

Transportation? This is another sledgehammer argument: urban farms produce food where it is consumed (in or near cities). Little or no deliveries by trucks or trains, therefore a significant reduction in the carbon footprint associated with the distribution of market garden products.

All the players in this industry claim it (and show it): vertical farms produce better, faster, healthier, fresher.

The largest vertical farm in Europe, for example, opened in December 2020 in Denmark, in a warehouse on the outskirts of Copenhagen. On 14 floors of a largely robotized installation and using only wind energy, Nordic Harvest produces 1,000 tons of salads and aromatic herbs per year, with 15 annual harvests and in a space 100 times smaller than usual fields. As the start-up notes, “it would only take 20 facilities like this to meet all the country’s needs for salads and herbs.” Another example, in Singapore, a small highly urbanized country, the government is happy to encourage the development of this new agriculture and has even undertaken to rent the roofs of buildings. Of public parking to install urban farms. Nine buildings in 2020 and seven new ones since March 2021 have been converted, as part of a program that aims to produce 30% of the country’s food locally by 2030 (compared to 10% today).

Without a doubt, urban farms mark a breakthrough, both industrial and intellectual. They induce a paradigm shift. “We free agriculture from the constraints of weather, seasons, temporality, distances, pests, natural disasters and climate,” describes Plenty. It is indeed another form of agriculture that it is about – a technologized agriculture, optimized and leaving nothing to chance. So an agriculture which forces to rethink the existing models in terms of production or distribution but also of trades. Farmers run today’s vertical farms as much as they are by data analysts and other Internet of Things (IoT) or artificial intelligence (AI) experts.

“Someone will reinvent those who manage these intelligent farms farmers become urban farmers-scientists,”, warns the futurist Marius Robles, former CEO of consulting firm Reimagine Food and Food by current CEO Robot. By 2040, “we must be frank and admit that the small farmer will disappear. In fact, it already is. The total number of farms in the European Union has fallen, with overbravery four million farms missing since 2003,” he explains, describing a future where urban “connected farms” will become widespread, “which will look more like an Apple Store. than at a traditional farm “ and which will produce on demand, based on predictive systems, the fresh produce needed by city dwellers.

It’s a fact. Salads and cabbages now grow on city rooftops, in compact containers that land anywhere, and in high-tech buildings that are rigorously controlled. A solution for the future to feed the nearly 10 billion inhabitants of this planet in 2050, 70% of whom will live in cities?