You are here: Home / Digital Marketing / iOS 14.5: only 12% of users let apps track their activity 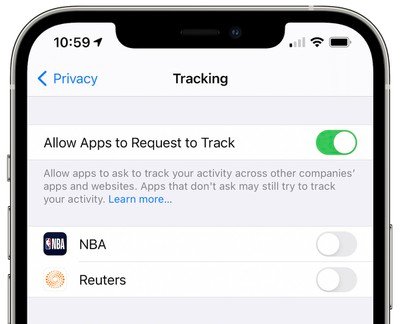 This results from the first two weeks of the App Tracking Transparency. A first trend that will not please Mark Zuckerberg.

Apple’s iOS 14.5 update was effective April 26, 2021. The latter was eagerly awaited, in particular with the deployment of the Tracking Transparency App. A minor detail that changes the rules of the game for brands that develop applications on iOS. The first figures are there: according to Flurry, only 4% of American users let applications follow their activity since the update and 12% globally. This is little.

On the user side, this update seems to be unanimous. The numbers speak for themselves. Only 12% of people who updated agreed to apps continuing to get their data to target them with ads. With the iOS 14.5 update, each time a user downloads or updates an application, it must ask permission before being able to track its activity. Now that they have a choice, most users are clearly saying “no”.

They carried this study out on a representative sample of 2.5 million daily active users of iOS 14.5 in the United States and on a sample of 5.3 million users worldwide. Facebook will have tried everything to prevent this from happening … to no avail. The social media giant had tried to convince users that these privacy measures were a bad thing. For Mark Zuckerberg, App Tracking Transparency will crush small businesses that rely heavily on ad targeting.

The social network had also said that they would force many apps to charge users for monthly subscriptions or more in-app purchases. Snapchat and Google also said that while most users decide to block apps from tracking their activity, the iOS 14.5 update will probably affect their results. Even Twitter, which was initially not opposed to the project, believes it could damage.

These first figures are just a glimpse of reality. Indeed, as the iOS 14.5 update is only two weeks old, we have to wait a little longer to realize its real impact on the applications and their business model. By the end of the month, we will have better visibility on the proportion of people who agree or refuse to track their activity on applications. This first trend should help app developers understand users value their privacy and will miss some targeted ads.