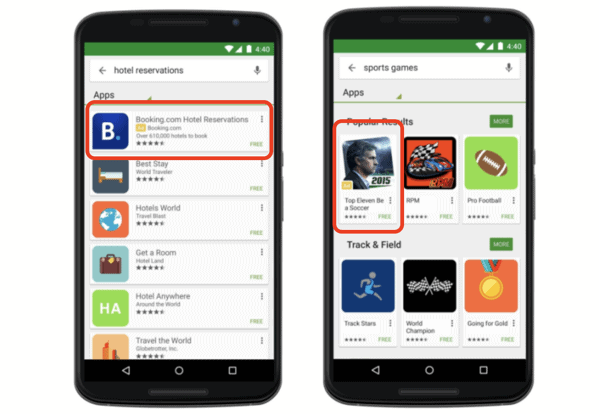 The general excitement about the privacy update around iOS 14.5 called App Tracking Transparency (“ATT”) is not diminishing. Apple will in future require its app developers to have a dialog box in which app users must agree to the use of unique identifiers such as the IDFA number (“Identifier for Advertisers”). The cookie banners under the apps, so to speak. Facebook has already published the first solutions for tracking according to ATT – but what about the big G?

Google has also reacted to the announcements by Apple in order to keep the effects on iOS campaigns bearable. Google relies entirely on the pulling power of SKAdNetwork. In the article we explain what this is about and how you can optimize your app campaigns in the future. Here we go!

In a recent blog article, Google admits that the changes in iOS 14.5 will have a major impact on the Google Ads conversions recorded for iOS campaigns. This is true for app campaigns on iOS, as these – in contrast to Search Ads in the browser – cannot access any data other than those that Apple has released. So if you only have Search Ads running, ATT will hit significantly less.

With a pop-up, app developers will in future have to ask for permission before using personal identification features. How many users will actually agree to the use of these features and how many refuse – no one can say exactly today.

Previously, advertisers could, for example, trace a purchase in a fashion app from the initial contact in Google Ads to the completion of the purchase and clearly assign the purchase to an ad group. This is now only possible to a limited extent.

In order to keep the failure of the conversion data as low as possible, all SDKs (program libraries) used, such as the Google Mobile Ads SDK, should be updated to the latest version in order to receive functions such as SKAdNetwork support. Google has announced full support for Apple’s SKAdNetwork alternative tracking API. This is a more privacy-friendly alternative that can measure the installation rate and performance of apps – but more limited than usual.

Because of the limitations of SKAdNetworks, only 8 conversions can be reported in parallel. So if you have over 8 app campaigns running in parallel, you will lose important data here.

The agenda is therefore: clean up! And combine campaigns with similar objectives into one campaign. We can still use many ad groups within a campaign to test different advertising media.

It is important, however, that the app installs with SKAdNetwork can we can simply assign no longer to individual ad groups, but only to a campaign. Google tries to compensate for the missing data with machine learning – but still keep a close eye on performing Google campaigns on iOS devices. If there is a sharp drop in conversions, it may be necessary to react here.

A chance for conversion modeling?

SKAdNetwork also enables the attribution of advertisements, but without the transmission of unique identification features of the user. If clear identification features such as cookies and IDFA are no longer accessible, so-called blind spots arise in which the customer journey can no longer be tracked. In order to still assign conversions, Google uses a system called conversion modeling.

SKAdNetwork also fits into Google’s business strategy to give data protection a higher priority in the company in the future. For example, support for third-party cookies, which have repeatedly fallen into disrepute because of a lack of privacy, will be discontinued for the in-house browser Chrome from 2023. With a market power of over 60% market share, this amounts to an end to third-party cookies.

The current versions of Google Mobile Ads (GMA) and Interactive Media Ads (IMA) SDKs already have support for SKAdNetwork. Besides the system message from Apple, developers can include their own explanation for the user why he should agree to the use of data again. That is up to each developer, however. Since it will initially enforce the changes on Apple’s ecosystem, a direct impact in the ad reports can be expected here. The changes in iOS 14.5 will impact other media channels in the medium terms.

Google Analytics practically relies on first-party cookies when collecting user data. In order to collect these, a user dialogue has already been necessary since 2020. This directional decision by the European data protection authorities has meant that they now presented us with a cookie banner on every website. One or more first-party cookies on a website usually belong to Google Analytics. Because of the changes made in Apple’s ATT, there are no further requirements, as ATT relates to apps and not to websites. To put it badly, one can say that the app operators are simply two years behind with data protection and are now receiving their very own form of the cookie banner.

Google FLoCs – A look into the crystal ball?

The announcement of Google FLoCs now falls around this time around the data protection declarations from Apple. Federated Learning of Cohorts (FLoC) is one of the key elements of Google’s Privacy Sandbox initiative for more privacy. The surfing behavior of users is recorded and processed on the end devices at FLoC in order to sort users into cohorts according to interest groups. These cohorts can then be something like “Interested in bedroom furniture” or “Interested in moving”. In ads targeting, people are no longer addressed individually, but as part of a cohort – a so-called FLoC.

According to Google, the FLoCs should achieve 95% of performing cookie-based ads. However, Google is silent on the calculation on which this statement is based. The announcement of FLoCs has met with mixed feedback from the advertiser community because Google has so far failed to prove that cohort-based targeting actually leads to excellent results. But the idea sounds interesting – and has certain parallels to the interests of Facebook Ads.

Google is giving the basket a clear identification of the user via cookies or fingerprinting: The search engine company asserts that after the expiry of third-party cookies in 2023, it will not strive for a comparable technology that would influence the privacy of users. Reads great, the press was immediately enthusiastic – it remains to be seen how the system works in practice.

Apple’s privacy offensive is directly pressuring Facebook’s business model as Facebook relies on its app tracking (over 70% of Facebook’s traffic happens in the apps). The dispute has even escalated to where Facebook bought a full-page ad in the New York Times sternly condemning Apple’s actions.

As the platform operator of Android, Google has a much greater influence on how its users’ data is processed on the devices. The Cupertinian tightening of data protection increases the political pressure on Google to do the same with Apple in many areas. The recently renewed announcement that Chrome will stop using third-party cookies in 2023support can be understood as a response to Apple’s push. Since probably fewer data will leave Apple’s end devices, Google will increasingly rely on data from its own platforms (Android, Google Maps, Google Analytics, etc.) Outside of the app ecosystem in the future. The data protection dialogues in apps will, however, gain acceptance. In the web sector, everyone is used to cookie banners – it remains to be seen how quickly they will get used to the banners in the apps.