You are here: Home / Digital Marketing / The Ultimate Guide to Motion Design 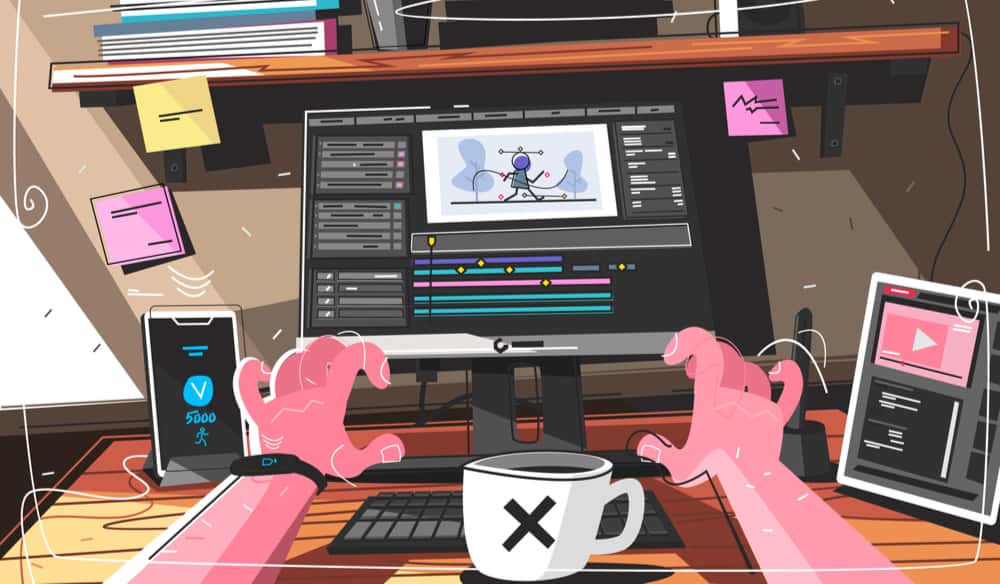 Motion design (or animation design) is a technique that consists of animating graphic elements. Its particularity is to use the potential of movement as the main animation tool. For several years, motion design has been on the rise: it is the new video trend in Content Marketing and Brand Content. The growing public appeal for audiovisual content makes motion design a real opportunity for brands.

Why do the Motion Design?

Used by hundreds of brands to strengthen their marketing and communication actions, motion design offers many advantages.

Motion design is an easy-to-remember format

Usually, a motion design is a format that lasts less than 2 minutes. The goal is to get a message or specific information to a target audience. At a time when our attention span is reduced, its short format makes it easier for your target to memorize and assimilate the message.

Video is a viral format, the superstar of social networks

In 2020, 7 in 10 consumers prefer this format to text to discover a product or service, and 90% of them say that video helps them make a purchasing decision. Also, video is one of the formats that perform the best on social networks, especially on Facebook or LinkedIn. For example, a Facebook video has on average 135% higher organic reach than a photo.

The price of a motion design video depends on many factors. Advanced formats integrating animated illustrations (motion graphics) produced by hand by illustrator, stop-motion, or special effects require a certain financial investment. But compared to other forms of animation (cartooning for example, or making a video with real actors), motion design is less complex to produce and therefore less expensive.

The main interest of motion design is its ability to transform a priori complex content into simple, visual, and understandable content by all. Animating images allows you to popularize a lot of information in record time and thus make you better understand your target. Motion design, therefore, fits perfectly into B2B content marketing strategies, whose content is often less sexy than in B2C.

The 10 principles of Motion Design

Imagined by Franck Thomas and Ollie Johnston, close collaborators of the famous Walt Disney, these 10 animation principles will help you understand the meaning of movements, and produce animations as close as possible to reality.

1.The timing, space, the rhythm

The design of a movement is based on our relationship to time. Time is used to change the frame rate of the animation, to change the way objects move according to the rhythm of the audio. Time also allows you to modify the speed at which an element will change thanks to the curves of the animation.

2.The fluidity of movement

How does the technique allow us to translate the creative idea? The fluidity of the movement makes it possible to control the effect that the animation will have on the consumer’s emotions.

In the real world, the movement of an object is dictated by its volume and weight. You must therefore take into account the weight of the object to define the intensity of a movement (for example, it will take more force for a car to stop than for a bicycle). The principle is the same for animating abstract images: you have to think about their weight and volume to define how they move.

When we move, the part of our body that moves first moves in the opposite direction to gain momentum. For example, if you are throwing a volleyball ball, you will first bend your arms slightly back and then push the ball up. Do not forget these anticipatory movements, which give naturalness to the animation and guide the viewer by indicating where he should focus his attention.

In space, there is no such thing as a straight line: every movement is affected by a series of disruptive elements such as gravity or momentum. To make your animation more realistic, add arcuate trajectories to the movements of your images.

The more an object moves, the more the forces it encounters (ground, air, etc.) affect its shape. Making your object or illustration malleable helps to set the tone and make your animation more lively.

On the same principle as anticipation, a movement that requires great force requires a lot of force to stop it. This results in a series of overlapping movements, during and after the action. To be as close as possible to reality, your animation must make these movements perceptible.

Abstract animation is by definition artificial. How do you make it as real as possible in the eyes of the consumer and ensure that it holds their attention, as a real person would? The answer is in the exaggeration of movements.

A line of text, a square specifying key information: simple things can quickly become boring. To reinforce the messages you want to convey thanks to these secondary elements, do not hesitate to add relief and movements supporting the main movement.

It is a simple principle but extremely important. When you create an animation, you may well put all your efforts into the intelligence of the animation and the texts, if the final rendering does not interest the viewer, the latter will not look at your motion design. The purpose of motion design is to communicate on subjects and ideas that are not always super sexy or easy to access. Make sure you make them attractive!

What is a Motion Designer?

A Motion Designer is a graphic designer, designer, or art director who has chosen to specialize in motion design. Its role is to design and then produce animated content, using illustrations, 2D animation, 3D animation, sounds, or even typography.

What is the profile of the Motion Designer?

The Motion Designer combines technical skills and creative skills. He must be able to create illustrations and then design the animation. Like any creative, he spends a lot of time getting inspiration from sites like Behance or Dribble and updating his technical skills regularly.

What is the scope of the Motion Designer?

The scope of a Motion Designer depends on the level of maturity of the company, often related to its size: for example, a large group will have many more visual elements to provide to the Motion Designer than a startup that starts.

In practice, the Motion Designer is found in 3 types of situations:

What types of projects do you use a Motion Designer for?

There are many projects for which the Motion Designer is called upon. However, for their marketing and communication, brands often call on a Motion Designer for two types of needs:

The vocabulary of motion design

For beginners and insiders alike, here’s a reminder of the key phrases needed when working on motion design projects.

How to do motion design in 8 steps?

The brief is the reference document that presents all the information necessary to understand the project and your needs. It is the basis of your motion design. Without a good brief, you are sure to waste time on all of the steps that follow. What elements should your brief contain?

Creating the script is the first step in producing a motion design. This is the backbone of the motion design video: the text that will be recited by the voiceover and/or written in subtitles. The script is decisive for the future, so be sure to validate a final version before moving on to the next step.

A good script should:

The storyboard is the pictorial version of the script. It can be done by an Art Director or by the Motion Designer directly. It is a PDF document which details the different screens of motion design and will allow you to switch to animation with confidence.

How to make a good storyboard?

Once all the previous steps have been validated, you must work on them to digitally create the defined graphic elements.

The animation is the assembly of all the elements created. This is the heart of motion design: giving movement to the images produced during the mock-up stage.

Creating a sound universe makes it possible to energize your video, to facilitate the comprehension of the message by your target, and to make your motion design more attractive. The most used sound illustrations: sound design, voice-over, music.

In general, it is preferable to provide a version with subtitles. Especially for social networks, knowing that a lot of video content is now consumed without sound.

This is the final step: now that all the elements are created, all you have to do is export your work in different formats. Warning: the final file is heavy! In general, you will need to encode your video, i.e. reduce its size by going from a .mov file to .mp4.

To give you the best possible chance to create successful motion designs, we interviewed Anna Waldberg, Artistic Director at YouLoveWords and Motion Designer. She shares all her tips with you: it’s a gift!

On graphic consistency and homogeneity

Make sure that the graphic choices embody your identity and respect your overall graphic charter (colors, typography, iconography, etc.).

Define text styles and adhere to them throughout the animated video. We recommend that you limit yourself to a maximum of 3-4 text styles. Example: title cards, keywords appearing on the screen, and numbers.

Define a graphic and/or illustrative style to be respected throughout the video.

On the structuring of the video

Define the outer margins and one or two structuring guides, which you will keep throughout the video. Make sure you wedge the content on it as much as possible.

6. The arrangement of the elements

Textual (texts, keywords, numbers, etc.) and visual elements (pictograms, illustrations, etc.) must be structured, aligned, and centered on the screen as much as possible. Pay close attention to this point: if the content appears on the screen in an unstructured way, the user may no longer understand anything and your message will not get through.

On the animation of graphic elements

Make sure to smooth the speeds to make the animations smoother and avoid the robotic aspect.

Your video should include enough transitions and different shots (close-ups, wide shots, etc.), not forgetting the pause times. As a guide, an illustration should never be static, and should not remain unchanged on the screen for more than 3-4 seconds.

On sequencing your video

At the storyboard stage, be careful to sequence the speech sufficiently. It can be spread over different screens or split into several times on the same screen. In general, a text appearing on the screen should not be more than 10 characters. For optimal clipping, the same element (text or visual) should never remain on the screen for more than 3-4 seconds.

10. Sequencing (cutting out each screen)

On each screen, sequence the elements so that they appear at different times, one after the other.

If your motion design contains a voiceover, it should be perfectly aligned with the visual appearances. What is said should almost immediately be visible on the screen, then disappear as soon as we move on to the next information.

On the readability of your motion design

The texts must be large enough to be readable on mobile.

Your textual and visual elements must be placed on a background whose color does not affect their readability. Likewise, the color (s) of these elements must be adjusted according to the destination background. So pay attention to tone on tone, incompatible colors, and say “vibrant”.

The elements must form a readable whole. For example, avoid superimposing text and illustrations if this obscures readability.