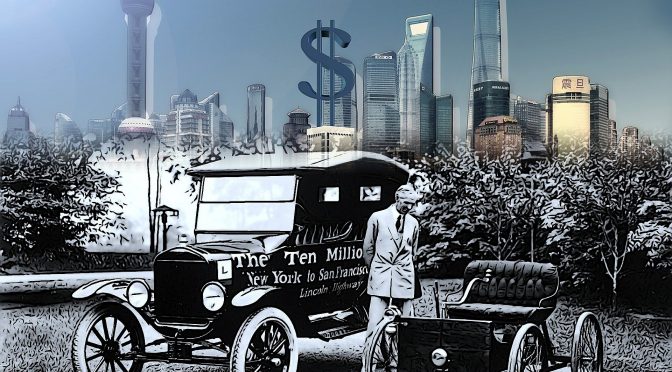 Henry Ford, the great pioneer of mass production, would have enjoyed the digitization of the economy. One hundred eleven years after Ford put the “Model T” on the assembly line, “Industrialization 4.0” has long had more severe effects than the original from back then. New business models are emerging everywhere, or old ones are completely turned inside out. Above all, optimization and increased efficiency are in the foreground. By no means, the researchers agree on how completely machines and software could replace human workers in the future.

Ford might not invent assembly line production, but he perfected modern vehicle manufacturing to such an extent that the first revolution in industrial production comes to mind. The influence of so-called “Fordism” on contemporary culture – through the vital standardization of the show and consumer goods consumption – continues to this day.

Toyota developed the perfectionism that began with Ford’s assembly line: the production system, indeed known as “Toyotism,” is committed to avoiding all waste forms. His goals: Consistent synchronization and standardization of processes, prevention of errors, reduction of material stocks up to their complete avoidance and “just-in-time production.”

Does this all sound familiar?

Fordism and Toyotism in digital form

Today we are experiencing Fordism and Toyotism again – but not “analog”, but in digital form. Some experts talk of a gigantic invisible tsunami: the digitization of the economy. There are different opinions about whether it is still rolling towards us or has already rolled over us.

For example, on the subject of artificial intelligence: “If you look at the rapid development of the last few years, I believe that in a few years there will hardly be an economic sector that can do without AI,” says Dominique Ziegelmayer of Trusted Shops.

In contrast, the social scientist Lisa Herzog, professor at the Center for Philosophy, Politics and Economics (PPE) at the University of Groningen, says: “Generating profits by grabbing people by their weak points predicted by artificial intelligence – that’s really the best thing we can do with these new ones Employ technologies? Or is it a case of natural stupidity on the social level that they are not used in places where they could be more urgently needed? “

Digital ones are replacing more and more analog services

Whether in the production of goods, in payment, in the financial sector, in the insurance industry, in the area of ​​mobility, in shopping and trade, basically in all areas of the economy and society – the following applies everywhere: old services are at least modernized, but many of them are more likely replaced by new ones. Bill Gates said about future payments: “Banking is necessary, banks are not.”

“Software will eat the world”, predicted Marc Andreessen, founder of Netscape and the venture capital company Andreessen Horowitz. Many companies pursue their products and services to develop, so to speak, predictive products based on data from the past that can be turned into money. Lisa Herzog asks the question “whether the algorithms with which we interact online help us to ensure that our ‘better selves’ have the upper hand – or, on the contrary, they are designed to exploit our weaknesses and mistakes”.

Digitizing the economy is not only good for the environment.

Big data applications are exciting, for example, with which companies want to increase sales on the Internet and lure consumers back to the shops on the other. The analysis of massive real-time data in the field of traffic can optimize logistics processes. This avoids traffic jams, reduces fuel consumption and pollutant emissions, makes better use of transport volumes, reduces empty trips and shortens travel times.

Even production itself no longer runs without big data: sensors at all relevant points in the production process collect data for analysis and optimization in real-time. For example, to predict a possible failure of a system at an early stage and counteract a complete production stop in good time.

Linking the various points within the factory and in the entire ecosystem and using information intelligently is of fundamental importance for companies to remain competitive,” explains Reinhard Geissbauer from the consulting firm PricewaterhouseCoopers. In 2022, the proportion of companies that use data analysis to optimize processes and product quality is expected to be 65 percent.

Examples of more efficiency through digitization

Does the digitization of the economy lead to massive job losses?

Speaking of employee savings: The most significant disadvantage of digitizing the economy is the potentially dramatic loss of jobs. History teaches that technical revolutions first destroyed positions and created new ones in other areas. Will there be a similar effect with the digitization of the economy? Or could it be different this time?

This fear is contradicted by Capgemini’s IT consulting firm, which surveyed around 1000 companies about artificial intelligence. In the study, the vast majority of respondents say that AI does not make humans work superfluous. The algorithms would take over tasks that were previously done by humans. However, companies would grow through the use of AI and, in turn, hire more specialists.

The economists Matthias Weik and Marc Friedrich, on the other hand, are more pessimistic. In 2017 her fourth book, “Otherwise pops! – Why we have to radically rethink business and politics, “ they wrote together with dm founder Götz Werner. In their opinion, “millions and millions of jobs” would disappear across industries in production, administration, banks and insurance companies and, last but not least, in retail. On the other hand, numerous new ones would also arise. “However, these are usually not filled by those who have lost their jobs.”

Dirk Messner, a political scientist at the University of Duisburg / Essen and director of the “Institute for Environment and Human Security” at the UN University in Bonn, believes that digitization increases concentrations of power and inequalities. He points to two opposed approaches: the authoritarian-digital attitude in China and the very liberal, mostly negative attitude of the United States. That is why the development policy expert advocates that Europe should develop its social model for the future. His proposal for defining goals: “Bringing digitalization together with social cohesion, participation and sustainability.”

Unconditional basic income as a result of digitization?

The economists Weik, Friedrich and Werner, are all the more in favor of introducing an unconditional basic income (UBI), which is inevitably linked to the digitization of the economy and society: “We are entirely convinced that the UBI is coming. In the course of Industry 4.0, so many jobs will be lost, and relatively few new jobs will be created for absolutely highly qualified specialists that we have no other option than to introduce the UBI.

With this prognosis, you place yourself in a row of many well-known company bosses. The bosses and founders of eBay, Siemens, Telekom, SAP, Tesla and many others are clearly in favor of introducing a basic income. The conclusion of the book authors: “Either the knowledge of a BEG will prevail among the elites in business and politics – or ‘otherwise it will pop’.”

By the way: Henry Ford also introduced something new for his employees – the eight-hour day (1914) and a new type of profit-sharing system. Simultaneously, he raised the minimum wage to more than double, and later to almost three times its original value. However, his social streak was not as pronounced as the “economic calculation” (quote Ford). Because the purpose of the wage increases was clear: the workers should have more purchasing power to afford mass-produced products. After all, someone had to be able to buy the cars built on the assembly line.