You are here: Home / Digital Marketing / In France, the Covid app threatens to flop, in the UK it is a long time coming. The cases show: Without Apple and Google it will be difficult 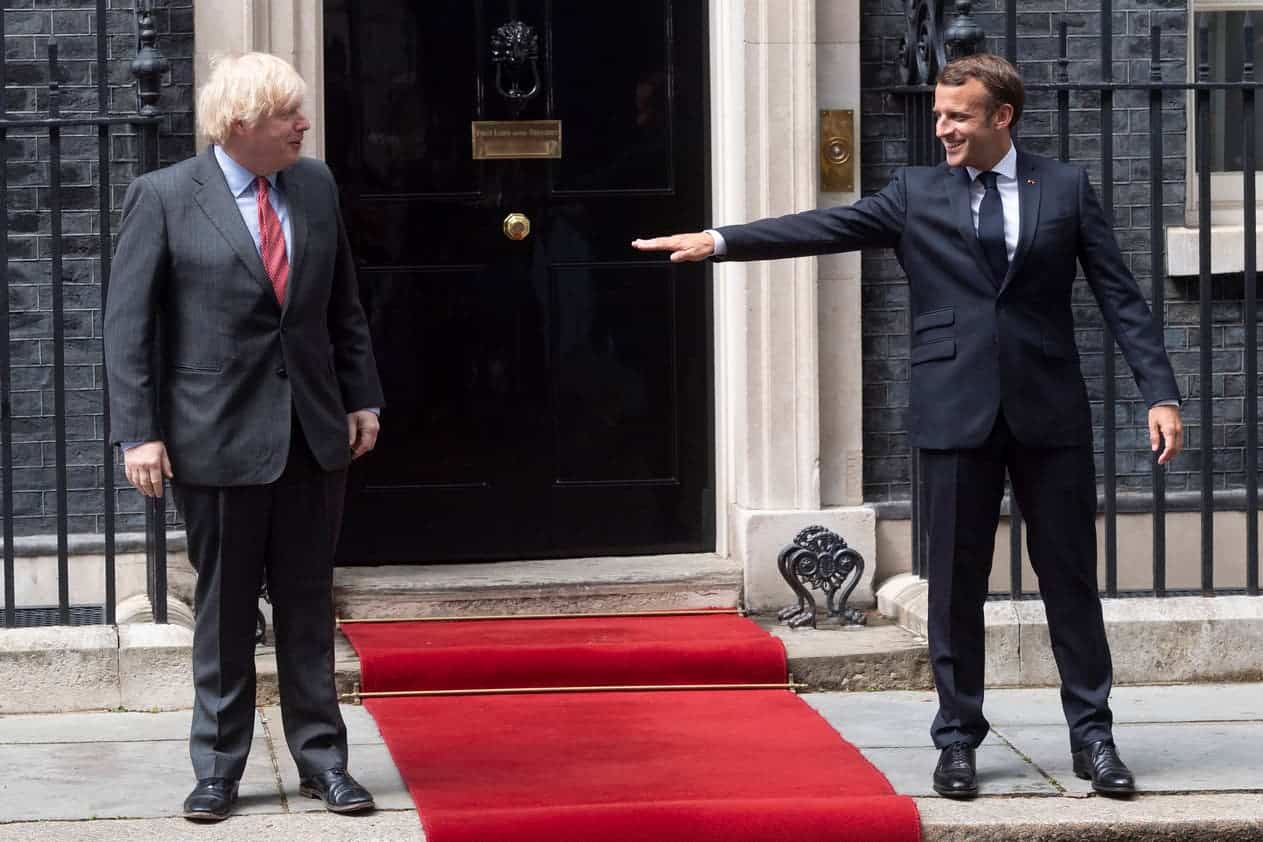 London and Paris rely on their approaches to the Corona apps. Now France is struggling with low user numbers, and the British will get their app in the autumn at the earliest, if at all.

The joy didn’t last long. On June 3, one day after France launched its StopCovid contact tracing app, the State Secretary for Digital, Cédric O, was satisfied. Six hundred thousand people installed the application on the first day, he explained on French television and spoke of a perfect start.

But disillusionment quickly returned to France. The figures that Cédric O presented last week are likely to be well below the government’s expectations: three weeks after the launch, only around 1.8 million French had downloaded and activated the app. That is hardly more than 2.5 percent of the population. In neighboring Germany, which launched its app in mid-June, more than 15 percent use it.

So far, the French app has only had limited results. Just 68 French people who tested positive for the coronavirus recorded their results in the first three weeks. Only 14 people who were close to the sick could be warned in this way. Particularly bitter: 460,000 French people have already deleted the app from their smartphone. The reasons for the low success can hardly be named with certainty. The now small Corona case numbers are likely to play a role. The particular route that France goes with its app, but also.

He was increasingly isolated in Europe.

Several European countries have developed apps in recent months to help track infection chains. The principle is mostly the same: the app uses the Bluetooth Low Energy transmission technology to store the encrypted ID of those devices that also use the application and come close to the smartphone for several minutes.

Most European countries are now adopting a decentralized approach: their apps only save as much data as possible locally on their respective devices. Only when someone has become infected and reports this will a few encrypted data be sent to a central server. The apps use an interface for measuring the distance and transferring the ID, which the technology groups Apple and Google, have developed. The unusual collaboration of the rivals is supposed to set standards and enable the applications to function correctly. But it is subject to certain conditions. The decentralized approach to data storage is one of them.

France, on the other hand, takes a different course and is therefore increasingly isolated in Europe. With the French app, more data comes together on a central server – the country does without the solution from Google and Apple. State Secretary Cédric O emphasized time and again that the decision was taken deliberately. It is essential to maintain the country’s sovereignty.

The French model has some disadvantages. On Apple devices, the application only works to a minimal extent without the interface. iPhone owners – who make up around 20 percent of smartphone users in France – should have the app open in the foreground so that it sends Bluetooth signals. However, the research institute Inria, under whose leadership the app was developed, seems to have found a way to counter the problem at least a little. The app becomes active on iPhones when another person approaches an Android phone and can then register the contact, representatives of the institute explained to French media. If two iPhone owners meet, and the app does not run in the foreground, the communication is not recorded.

Data protection concerns may also have contributed to the fact that many French people, who are fundamentally suspicious of the government, reject the app. Fifty-four percent were concerned about their data, according to a May survey. The central approach is also controversial at the European level. Some privacy advocates fear that too much information would be concentrated in one place, and misuse could not be ruled out. It is questionable whether the French would have trusted an app more with a decentralized approach. France’s data protection commission had given the application a generally positive testimony before it was launched.

However, a researcher at the Inria institute discovered in mid-June that “StopCovid,” when a user-declared himself ill, sent more data to the central server than the government claimed: This is not only the case for encounters in which cellphone owners over 15 minutes are less than a meter apart, and it is therefore assumed that there is a risk of infection. A meeting is transmitted even if it only lasts a few minutes, and the distance is more significant. Cédric O tried to resolve privacy concerns last week. He said he hadn’t noticed any privacy violations. In the future, a filter should limit the number of information transmitted.

If contrary to current signs, the French app is still thriving, another problem remains to be solved. Because of the central approach, it should not be easy to make StopCovid compatible with counterparts from other countries. But that is precisely what will be necessary so that it also works outside the French borders.

Great Britain is there without an app.

On the other side of the English Channel, Britain would be happy if it had problems with France. The launch of a British Corona app, initially announced for May, was delayed, but now it is entirely in the stars. The government no longer wants to state the exact time for the launch; it is hoped for autumn. This means the island has to monitor the coronavirus the old-fashioned way with phone calls and inspectors when the last significant loosening of the lockdown is due. From July 4, pubs, restaurants, and other entertainment venues may also reopen under certain conditions.

The number of deaths in the UK is among the highest in Europe. Just as London initially followed a unique path in the fight against the pandemic and delayed the lockdown until the end of March, the government of Prime Minister Boris Johnson also wanted to find a solution of its own with the tracing app. As a centrally organized country with a central healthcare system, the National Health Service (NHS), similar to France, user data should also be stored centrally. According to British experts, this would have made data analysis easier. Because this centric approach to data storage is not possible with the interface developed by Apple and Google, the UK relied on its development.

This NHS app was tested in May on the Isle of Wight off the south coast of England – due to the island location, an excellent way to monitor the movement patterns of the population. It was found that Android smartphones registered mutual contacts in around 75 percent of the cases, but Apple smartphones, in the worst case, only 4 percent. The reason for the discrepancy is that the use of Bluetooth for apps on Apple phones is restricted if you do not use the interface developed by the companies.

This maladministration was the reason for Health Minister Matt Hancock to make a U-turn in mid-June. Great Britain will now develop the app based on the Apple-Google interface and thus say goodbye to the central storage of the contact data. The mutual recognition of smartphones works very well via Apple Google technology, as a parallel British test showed.

But there was another problem, and therefore a quick start of the new app is not to be expected: According to British data, the distance measurement between the smartphones works poorly. Based on the Apple-Google interface, it is impossible to tell whether a cell phone was at a distance of one or three meters from the other smartphone – an essential factor in deciding whether a user should quarantine prophylactically. According to Hancock, the distance measurement worked much better for the drawer-based in-house development. He didn’t say why. But because neither approach is reliable, none will be used for the foreseeable future.

Apple and Google fight back.

The British accusations leave Apple and Google as bogeymen. Google had announced that it only offered an interface, not a complete app – and implicitly handed the responsibility back to the British programmers. Unnamed sources from the Apple group complained in the newspaper “The Times” that the government had not previously raised the problems with the distance measurement. London’s announcement that it would cooperate closely with Apple would also have to be followed up in the future. Health Minister Hancock had previously said that he wanted to incorporate the well-functioning distance measurement of the failed in-house development into the work with Apple and thus deploy a hybrid model.

However, other countries that use apps with the decentralized approach and the interface of the two tech groups have fewer problems. The developers of the German Corona Warn app reported that their application was able to correctly determine 80 percent of the contacts – a counterexample that Prime Minister Johnson had to be kept in the lower house. In Switzerland, it is said that the distance measurements are not perfect, but one is satisfied and continues to work on improvements.