You are here: Home / Blogging / The TV station that makes you sick 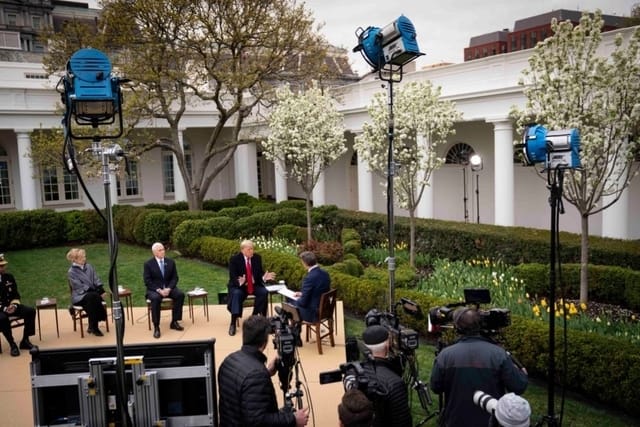 Fox News keeps downplaying the coronavirus outbreak. The Americans couldn’t care less if the broadcaster didn’t have such a huge impact.

Hardly anyone believes that the coronavirus will be contained in the United States in two weeks. Perhaps not even Donald Trump himself believes it. But that didn’t stop him from announcing last week that he wanted to open the country again on Easter Sunday. He did – of course – at Fox News, it was his 75th interview with the TV station. “I want to see fully occupied churches across the country at Easter,” Trump said.

This would have been an opportunity for journalists to raise doubts: How is that going to happen if it becomes increasingly clear that the USA could become the new epicenter of the Corona outbreak? But there are no critical questions for the President at Fox News, not even when he promises an Easter miracle. “Oh, wow,” one of the moderators stammered. “That would be a great American resurrection,” said her colleague.

The relationship between the conservative TV station and Trump has long been symbiotic. The moderators outbid themselves to defend the president against any accusations, Trump, in turn, uses Fox as an amplifier for his message and his conspiracy theories. With the onset of the corona crisis, a new debate about Fox has flared up. It revolves around the question of whether the most-watched cable transmitter in the United States has become a threat to public health.

“The more I learn about the virus, the less I worry.” Moderator at «Fox & Friends»

For example, Ashish Jha, director of the Global Public Health Institute at Harvard University sees it. “Some right-wing media commentators are spreading a particular type of misinformation that is very harmful,” the doctor said in the New York Times. This would result in Americans dying from the coronavirus.

Whoever watched the station last experienced three different phases of reporting. In the first phase, the moderators denied that the coronavirus was a problem at all. It is a hoax, a hoax. The media and experts who warned of the spread of the virus are “scaremongering” who have only one goal: to harm Trump. “You want to beat him up with it,” said Sean Hannity, the president’s favorite presenter, and spoke of “coronavirus hysteria.” Another commentator spoke of the “next attempt to impeachment against the president”.

Until recently, Fox News also said that the coronavirus was no more dangerous than regular flu. “The more I learn about it, the less I worry,” said a Fox commentator on breakfast television. On March 13, when 16 US states had already closed schools because of the virus, a presenter made fun of social distancing recommendations like those to avoid unnecessary trips: “This is the safest time to fly now, all terminals are empty. » All of this coincided with the way Trump spoke about the crisis: no problem.

«You can’t beat the deeds of this government. It does an incredible job. »Moderator at Fox

The course only changed after the president declared a national emergency in mid-March and called on the Americans to adhere to exit restrictions for 15 days. Now that the threat hadn’t “disappeared,” as he had previously said, Trump was talking about the coronavirus in new, earnest tones.

And from that point on, Fox began the second phase of reporting: a seamless – or, depending on your point of view: shameless – transition from denial to praise. Corona was suddenly an “incredibly contagious and dangerous virus” and Trump’s efforts to fight the spread were heroic. «You can’t beat the deeds of this government. She does an incredible job, »said a moderator.

The damage was done, however. According to a poll by the Pew Institute in mid-March, 79 percent of Fox viewers find that other media exaggerate the dangers of the virus. Only 42 percent of the Republican supporters who make up Fox’s core audience said in a Gallup poll that they were concerned about the virus. It was 73 percent among Democrats. Seldom has it become so bright that the assessment of a pandemic in the United States now also depends on which media people consume. Many Fox viewers belong to the Corona risk group: their average age is 65 years.

In the meantime, Fox has reached the third phase – where Trump is also located. It consists of crude, factually false optimism about the use of all sorts of new therapies and miracle cures for the virus. This optimism is spread by moderators like Sean Hannity, but also by the doctors who regularly appear at the station. One of them is known in the United States for its controversial diet products that have been the subject of a Congressional investigation.

Above all, however, there is a call for a return to normality as quickly as possible, which is increasing in volume with the moderators of Fox News. They are not alone in conservative circles. However, the tone they strike is unique.

Only Murdoch’s party is canceled

“Our ruling class and their TV mouthpieces, who are afraid of this virus, can afford an endless shutdown,” said moderator Steve Hilton – referring to criticism of the US government’s health experts that the all too rapid easing of the Warn measures. In this reading, everyday restrictions become the fetish of medical professionals who don’t care what damage they cause to the economy.

By the way, one who dealt with the health risks of the virus very early on is Rupert Murdoch. He wanted to celebrate his 89th birthday on March 11, at a time when they still described the pandemic as a hoax on Fox News every day. Murdoch’s family, the New York Times reported, canceled the celebration out of concern for his health.