You are here: Home / Blogging / Selfies in front of war ruins: influencers discover Syria – and find many things beautiful 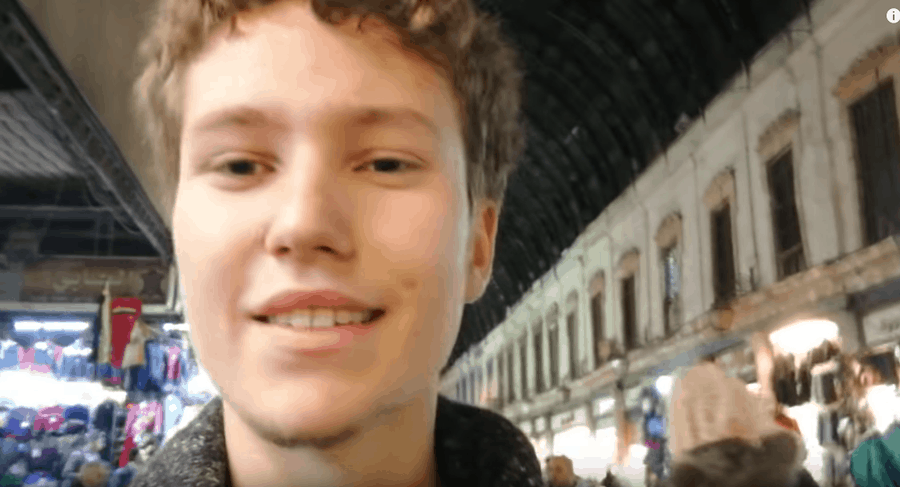 Xavier sits in the back seat of a car and speaks to the camera: “The border crossing was surprisingly easy.” Plastic bags are stacked behind him in the open trunk of the vehicle; the sun is shining in his face from the side window; distant voices can be heard in Arabic from the car.

Xavier is 19 years old and runs a travel blog on YouTube. The scene shows its first few minutes in the war-torn civil country of Syria. He drove a short taxi from neighbouring Lebanon to Damascus, the capital of Syria, into a conflict that has now lasted almost nine years. A little later he will rave about Damascus as “one of the most magical cities” he has ever visited.

More and more influencers and bloggers are discovering Syria. They show filled markets and extravagant parties – while bombs can still be heard in the background.

Is it ethical to visit a civil war country? Does such a trip strengthen the civilian population – or only the regime?

Syrian President Bashar al-Assad is a butcher, has let poison gas attacks against his people and brutally tortured thousands. Whoever travels the country strengthens Assad’s regime and sees only part of the truth: those whom Assad wants to tell about the conflict.

On the other hand, there are regions in Syria that were almost untouched by the war. That was either never contested or have been rebuilt for some time. People live there who try to return to normal after nine years of death and destruction. Anyone who travels the country has the chance to hear their truths.

YouTuber Xavier says that these are precisely the people he wants to get to know and show in his videos. However, it is problematic: In the past few months, several international influencers have uploaded photos and videos to Instagram and YouTube. Most videos with their lively background music and their selfie perspectives hardly differ from other influencer reports from Thailand or Greece.

YouTuber Xavier in the famous Souk al-Hamidiye in Damascus: “Emotionally totally mixed up.”

“Traveling the Unknown” is the name of Xavier’s blog. And that’s the program. The young Brit has been filling the blog and YouTube page with his travel experiences for almost a year – videos from Pakistan, Iran, Saudi Arabia, Iraq and a total of three videos from two visits to Syria. They show him celebrating with the locals and taking a classic tour of the old town, just from places that others only know from the news.

“Syria is such a country full of contrasts, and I was mixed up emotionally,” Xavier told bento. Even though he had prepared himself, he knew that there are no longer only contested places. But his first impression was different than expected:

“I had imagined a war-torn country; then I was caught off guard by the lively nightlife.”

Xavier has a British and a Polish passport, he lived in Oman for six years and learned Arabic. Language helps him on his travels through the Middle East.

Xavier is now in Syria for the third time: he has organized a blogger trip to Syria – in the parts controlled by dictator Bashar al-Assad.

In autumn Xavier advertised the trip on his blog. Eight interested parties from the United States and Europe finally accepted his invitation, and only one blogger from India was denied entry. Together with a tour operator from Damascus, he organized visas and accommodations. In one week it will go across the country, from Damascus to Homs, to the desert city of Palmyra and the coastal town of Latakia – the places in Syria that are under the regime’s control.

It doesn’t work outside the regime. Only those who come to the country who have a security clearance and who receive a visa go into the country. Impossible for many Syrian refugees today – but hardly a problem, especially for western visitors.

“I do not express myself politically, and I do not travel to destroyed neighbourhoods in a targeted manner,” says Xavier, “that would be humiliating to the people who live there.” But he thinks it is essential to see still the parts of Syria that are intact or rebuilt: “It is important for the economy, and it gives people hope.”

“I can’t see anything reprehensible about travelling to the places where I’m welcome.”

Accordingly, he did not want to keep the war secret, but he also did not want to focus on it. This is visible in his videos. Xavier tries not to evaluate the Assad regime, rebel groups or Islamists, instead of exuberant scenes typical of influencers, his videos tend to have grandpa-like, calm camera pans.

When the Syrian war started, Xavier was eleven years old. He says he has only really been concerned with war since he first came to Damascus. “What people told me was so shocking that I could hardly put it into words myself,” he says. “There are those who proudly tell me how many times they have been shot. And some prefer to remain silent.”

When he stands in a video on a viewpoint just a few kilometres from the still contested Idlib, detonations can be heard in the distance. Idlib is the last anti-Assad province still held by rebels and mostly Islamists. Russian and Syrian fighter planes also bomb hospitals and schools there despite the ceasefire. More than 235,000 civilians are trapped in the province ( United Nations ). You can see in the video how difficult it is for Xavier to get the contradictions together: happy Syrians around him, the hall of death just a few kilometres away. “People later told me that this had been the case here for eight years,” says Xavier, “so you have to get used to it or perish accordingly.

Other bloggers are less reflective: the videos of Polish influencer Eva Zu Beck got the most attention. Her YouTube channel has more than 400,000 subscribers; she has travelled to Yemen and Iraq in addition to Syria. Her video titles in the typical influencer singsong are “How you feel like a tourist in Damascus”, “My crazy road trip as a woman through Iraq” or “I never thought what Yemen was”.

Influencer Eva in Syria: “This is devastating, so emotional.”

“TheLifeofJord” films bullet holes in Bosra and then in heroic poses in the city’s old amphitheatre, the vlogger Drew Binsky races through Damascus and wants to find out how many decorations can be bought for ten dollars. You come to Syria for the thrill. The search for the most dangerous and remote places is called “dark tourism”. Travellers consciously visit areas where people have suffered, Chernobyl or Fukushima are such places, but also civil war countries like Somalia or Syria.

However, critics say: What the Syrian influencers do is more than “dark tourism” – it is propaganda in the sense of Assad.

In 2010, before the war started, 8.5 million tourists came to the country ( Al-Bawaba ). Then the numbers collapsed. How many visitors are coming back is unclear. The Syrian Ministry of Tourism has published three reports for 2019, none of which contain figures. Instead, it advertises in videos with sandy beaches and eco-tourism, as if the war never happened.

Accordingly, the first travel agencies – mainly from Russia and China – are offering tours to Syria again. Local companies from Damascus also help with entry. In travel forums like the Lonely Planet, “Thorntree” tourists exchange their first experiences and give tips on how to get into the country.

The tour group that the YouTuber Xavier is currently guiding through Syria no longer has to worry about. An agency from Damascus organized everything. Drivers and guides would “be around them,” says Xavier, “but it’s not a North Korea style, we also have our freedom.”

He hopes that his fellow travellers can experience Syria as he does, says Xavier, with all its contrasts that they learn more about the country, about the people. And the war.