You are here: Home / Digital Marketing / Will iPhone 11 Beat the Concurention 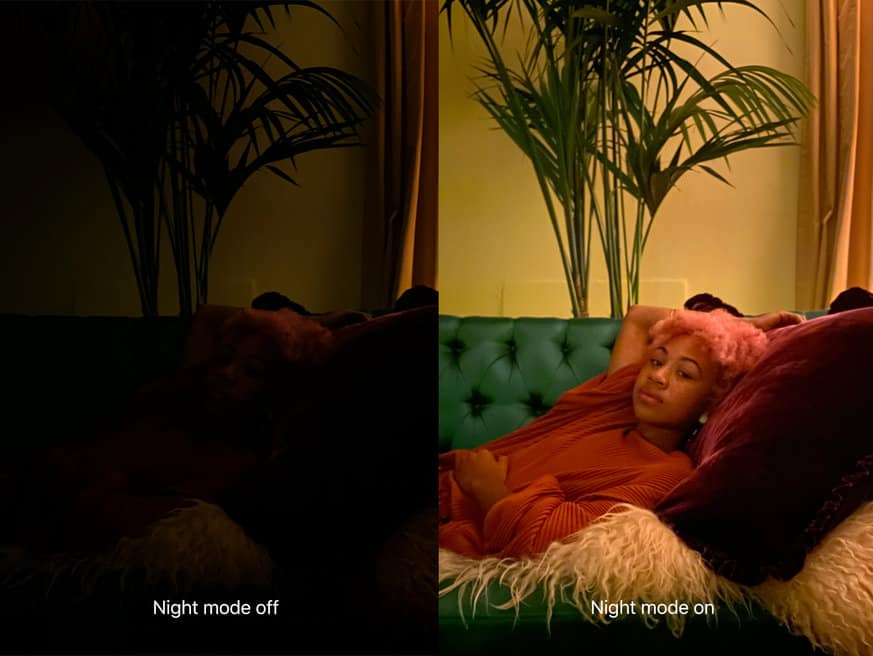 This is an opinion contribution. If you were to disagree with one of the following points that I have mentioned, that would be extremely surprising.

Small joke! Of course, I hope for much (well-founded) opposition in the comments column and at least twice as many good reasons why Apple is on the wrong track. And you’d better buy that [ insert the name of your dream phone here ].

But enough of the counsels. Let’s come to the 11 reasons why the iPhone 11 will hit like a bomb, and Apple will defend the smartphone crown with it.

During the keynote, the technical advantages of the new iPhone processor were praised in detail. Non-nerds just have to know that Apple installs in its mobile devices by far the best processors. In contrast to the chips of a competitor, Huawei is purely proprietary developments. Designed in California.

“At the heart of an iPhone is a special chip made entirely by Apple. And so far these chips have been competing against each other in the race for the fastest processor in a smartphone in recent years. “

Do not get me wrong! It is not primarily about pure speed and computing power, but about efficiency. And especially for energy efficiency. So not only PUBG gamers benefit, but all users.

Apple has (among the mobile phone manufacturers) the unique advantage that it controls the entire production chain in the processor development, states Phone Area. From chip design to software. With the result that your own specialists can optimize everything “in-house.”

Good to know: The cheapest new iPhone has the same processor (“A13 Bionic”) as the more expensive Pro models.

The iPhone XR has, according to Apple PR, the most extended battery life of all previous iPhones offered (including the more expensive iPhone XS and XS Max, which are now no longer available).

And the battery of the iPhone 11 should be even better! The Californians promised that at the keynote address – and soon have to be judged by this announcement.

If the information is confirmed, the responsible persons have actually listened to the customers once. That’s precisely what has been required for years. More battery!

The Pro models supposedly last longer. However, because they cost much more, the price-per-battery-ratio is best on the cheapest iPhone.

More about the battery performance is 9to5mac.

Update: The battery size is leaked via Twitter. According to the relatively reliable source, the iPhone 11 has a capacity of 3110 mAh (milliamp hours). By comparison, the iPhone XR has 2942 mAh. (Where the battery capacity alone says little about the endurance, it depends on the energy efficiency of the installed processor, displays, etc.).

I have not yet formed an opinion on the pastel colors. I want to see real. And even if the safety glass should have become even more stable, the iPhone 11 must well in a protective cover. picture: apple

Yes, yes, the competition has been around for a while, I know.

The main thing, you can now bring out the iPhone at any time of the day or night, whether inside or outside, and must not be angry when looking at the snapshots over raven black “Fails.”

Google hit Apple with night mode (at Pixel 3) last year, noted Apple blogger John Gruber (“Daring Fireball”). But the implementation on the iPhone seems to be more “natural.” The night mode simply turns on automatically, if necessary because of the light conditions. (And there is also the option to disable it, similar to the camera flash.)

In the competition, night mode is so active that night scenes often look like they’ve been shot in daylight – like in old Hitchcock movies.

I join Gruber in hoping that Apple’s implementation of the night mode is more restrained: “The goal should be to make it appear that the camera can see in low light, not that dark scenes look brightly lit.”

This photo, supposedly taken with the night mode does not look too bad …

One thing is sure: the iPhone 11 has the same night mode as the much more expensive Pro models. Apple can make optimizations by a software update.

Apple refers to the two camera sensors as wide-angle and ultra-wide-angle. This could hold four times more of the environment, up to a field of view of 120 degrees.

Good to know: The cheapest new iPhone has the same wide-angle features as the much more expensive Pro models. Apple closes it to the competition, without overstraining the users with frippery features.

According to Apple’s website, the iPhone can now take portrait photos of objects and pets.

This was a feature that worked on the iPhone X, iPhone XS and iPhone XS Max, but the iPhone XR stopped in the rain, according to Tech blog Redmond Pie. “With the iPhone 11, the spiritual replacement for the iPhone XR, this new change is very welcome.”

The rumors that Apple at the iPhone keynote a novel smart etiquette à la Tile presents, have not come true. But the new iPhones are ready for it.

Also in the iPhone 11 is an ultra-broadband chip, called the Apple U1. The small part offers a variety of applications around the high-precision location.

“Ultra-Broadband is a low-power, low-power wireless technology that allows for more accurate indoor positioning than Bluetooth LE and Wi-Fi.”

With the update to iOS 13.1, Apple will introduce a first feature related to smart tracking. An improvement in contactless data transfer between multiple iOS users via Airdrop function. But that’s just the beginning, reports Wired magazine.

In the future, users could hang a coin-shaped “Apple Tag” on their keychain, place it in their wallet or attach it to any conceivable item. And with the iPhone, you could always find out where the issue is. Accurate to a few centimeters.

Conclusion: The cheapest new iPhone is equipped for innovative applications around Ultra-Wideband (UWB). There may be news in October.

More about the U1 chip and UWB is available at Engadget.

Faster Wi-Fi instead of 5G

“Wi-Fi 6” is the latest version of the international 802.11 standards for wireless networks, which we generally call WiFi. The current version that most wireless routers are likely to use is 802.11ac or Wi-Fi 5. Devices that support Wi-Fi 6 still speak the same “language” to communicate with each other – they just talk faster and more efficiently than before.

In other words, the iPhone 11 is equipped for a future in which fiber optic cables are standard and bring the ultra-fast Internet to the routers in the offices and apartments.

The smartphones, which also already have Wi-Fi 6 on board, according to the report, the Samsung Galaxy S10, the Galaxy Note and the (not yet launched) Galaxy Fold.

PS: That the iPhone 11 does not support the fast new mobile standard 5G, is annoying, but in my opinion, negligible. The surfing speeds provided by the 4G network, which is still being upgraded, are adequate for all standard mobile applications.

If contrary to expectation, a revolutionary, 5G-based service would establish itself in the next few years, one would have to “repel” the iPhone 11 with a loss.

More about Wi-Fi 6 can be found here at cnet.com.

The back does not look stupid

At least not as crazy as the much more expensive Pro models. picture: keystone

Where most users probably put the new Apple phones in a (new) case … photo: EPA

Face ID is, even more, user-friendly

The automatic face recognition from Apple, called Face ID, is fantastic. After a few days, you got used to it. It’s so much easier and more reliable, especially with wet or dirty fingers. You look at the (awakened from hibernation) iPhone, already the display is unlocked, and you can “finger.”

No other manufacturer has anything comparable to offer in terms of biometric identification. And because Apple’s innovative 3D facial recognition can not be recreated, it makes fun of the “notch” and compromises on safety and usability.

Since Apple introduced Face ID with the iPhone X in 2017, a similar solution for Android smartphones is still waiting, the tech portal WCCF states in a recent post. But now take Google with the Pixel 4 a start: The new flagship has “leaked” photos no fingerprint scanner, but a face recognition, which also works when wearing sunglasses.

Whether the sensors evaluate only a 2D photo of the user or create a 3D map of the face, similar to the iPhone, we will probably learn in October, if the new Google phone should be presented.

Apple is already on.

Face ID works with the latest iPhone generation from a wider angle. This means that you can just touch a remote iPhone on the table and does not have to lift it to unlock the screen and check the messages.

Love, er, skeptic. No matter if you swear by conventional finger scanners in the home button or on the new, integrated sensors in the display. Face ID is worlds safer and more user-friendly, and now even faster. Even with the cheapest new iPhone.

I would not say cheap, but it is always reasonable, the iPhone 11.

Starts at $999. So much is flipping for the variant with 64 gigabytes (GB) of memory. The catch: The place promised by the manufacturer is only on the packaging. Because of the preinstalled system software and apps, there is no 60 GB left for your own photos, videos, and data.

That can be enough if you are frugal, and if you pay extra for additional online storage: Apple’s iCloud basic offer is known only to contain a whopping 5GB. Another 200 GB costs 5 $ per month or 60 $ per year.

One could outsource the own pictures and films with the Google photos app into the free Google cloud. Whereby you pay with your personal data. Who wants to play it safe, takes the iPhone 11 with 128 GB of memory, and spent 879 francs.

The iPhone 11 costs less than you pay for top smartphones with the Android operating system. Logically, you get less for your money: no OLED display, less internal memory, only two-instead of triple camera.

Tech journalist Matthias Kremp from our former media partner Spiegel Online puts it in a report as follows in a nutshell: Apple scratches the middle class.

I would say, more than that. This year’s “budget” iPhone will convince many users who are considering buying a new device but do not want to spend 1200 $ with its value for money. And you get an annual subscription to the streaming service Apple TV +.

In the iPhone 11 is technology from the high-end area in it, and with the cameras and the battery, Apple has pumped the areas that are central to purchase decisions.

Anyone who believes, however, that he needs a 5G connection shortly, will have to buy a more expensive device anyway, whether with Android, or (from 2020) with iOS.

PS: If you want to see the iPhone 11 up close today, you can do so thanks to Augmented Reality on an iPhone or iPad. Just open this website.